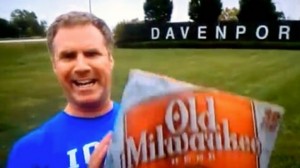 Will Ferrell in Davenport

It’s been a while since I’ve updated, so I thought I’d post the latest episode of the HipMojo show. I haven’t posted an episode here since August when I posted show #3, and it’s interesting to see how the show has evolved.

In any case, I digress. Let’s get down to the show itself…

How Investors Reward Greed Instead of Risk

In the first segment, we discuss whether “greed is good.” Specifically, we’re talking about how the web seems to reward bad behaviour. Just look at how the 4 big web IPOs of the year:

In the second instalment of episode 18, we turn to newspapers and how they’re still trying to charge for content. Specifically, we address how Sun Media is rolling out a metered pay plan.

Personally, I think that you need to offer something really unique/special to charge for it, and Ash chimes in to point out how the Wall Street Journal and New York Times have gotten away with paid content because they do just that.

In this final segment of episode 18, we enter the lighting round and then turn to the email of the week. During the lightning round, we discuss:

Then we turn to the email of the week, Ash chimes in on whether we’ll see more or less web IPOs over the coming year.