How ‘Murica Saved My Family Vacation

We had our first our first family vacation this year, me and my son, that is. He’s 8 years old, but we’d never been on vacation together before. It took a cliched custody skirmish (in which I generally got my ass handed to me) for me to win some guaranteed vacation time and the right to take him out of the country, but the evening after I did, I booked four tickets for a seven-day jaunt down to Panama City for him, myself, and the grandparents.

It was going to be an adventure of a lifetime, or at least insofar as the life experience of an 8 year old boy is concerned. We were going to get surf lessons, check out an island full of monkeys, and do all the things that us Gringos do when we head down to a South American country to commodify the climate and the culture. One of my former clients, Corporate Stays, even gave me a deal on one of their slick Panama apartment rentals.

It was going to be epic. The stuff that happy childhood memories are made of.

Our flight was supposed to depart on a Saturday morning, but was delayed three times over. By the time we boarded, it wasn’t even clear whether we’d make our connecting flight, but we did, deplaning in Miami just in time for last-call for boarding.

There was a problem, of course, getting up into the air on time, and then about half-an-hour into our flight to Panama City, we got caught in a holding pattern because of something to do with a malfunctioning radar station along the way. All in all, we’d be arriving about two hours behind schedule, and had no way to know whether our driver would still be picking us up at the airport, or whether the concierge would still be on hand to check us into our apartment rental.

Things were getting off to a rough start, but after a long, up-hill battle, we were on our way. This was happening, and we were almost there.

By the time we landed in Panama City, everything in the airport was closed. We might have to find our own way to the apartment, and maybe a hotel room for the night if there was no one to check us in, but we were willing to take our chances with a cab driver in strange city because this was our family vacation. It was our family adventure, and we earned it, and we were going to make the best of it — especially now that we were here.

My parents passed through ahead of us, and were photographed and finger-printed, which struck me as odd considering they’re both over 65, have no criminal record, and look about as menacing as, well, a 65 year-old couple from suburban Canada. Their passports were stamped and they were let in.

When my son and I passed through after them, they were having trouble scanning his passport, so they sent us to the next agent over. She was able to scan his passport without a problem, but then noticed something about my own passport that the previous agent had missed: it expired in 2-1/2 months.

Now, I was only going to be in the country for 6 nights, but apparently this posed a problem because they issued standard, 3 month tourist visas. 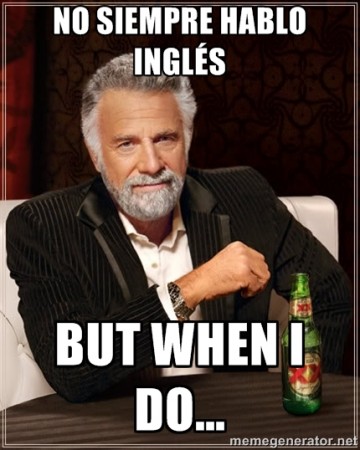 I’m not sure how to explain everything that happened next because, well, the extent of my Spanish is ordering a beer, asking where the banos are after I drunk the beer, and haggling with souvenir vendors. What I do know is that there was an unseen supervisor, a flurry of custom agents who were alarmed, stressed, and outraged that said supervisor was following such a strict interpretation of the rules, and something about how this might get resolved in the morning when a higher-up supervisor showed up for work.

All that was clear was that they were letting my parents and son into the country, but not me, and my son. I told them to go ahead and check into the apartment while I stayed at customs to sort it out the morning. We’d all just spent over 12 hours in transit, and they all needed a good night’s sleep more than I did.

My son was inconsolable and he refused to leave my side.

They took our passports and escorted us to a waiting area.

After a tense period of time where increments like minutes and hours lost all meaning and context, we finally got my son tucked into a nest of clothing in an unlit room off to the side or the main waiting area. Then we settled down, ourselves, to brood over unanswered questions like:

The tension and anxiety weighed on all of us, and night passed excruciatingly slow. The guard keeping an eye on us was friendly, though, and offered to do a pizza run, bringing back coffee and water, too. We took turns napping in the room with my son, a room scrawled in messages from people from around the world about precisely this kind of thing happening to them. We even witnessed it happen to a few other tourists — a woman who was separated from her Panamanian boyfriend when who she was travelling with, and a mother and her 5 year old daughter were still there when we sent out of the country in the morning.

So nothing was sorted out in the morning.

There was no intervention by some higher-up supervisor. Instead, at around 6am, the guard who’d watched us all night brought us our passports and four tickets to Montreal via Miami. Apparently, Panamanian customs had managed to make American Airlines change all four of our return ticket dates at no cost because they were supposed to flag passport issues like this before they became, well, issues. They even put my son and I in business class, where I could give him a healthy meal that wasn’t airport fast-food or pizza.

At the boarding terminal, the guard shook my hand, wished me luck, and told me he hoped I returned once I had a more recent passport. We boarded the plane and decided to try our luck in Miami.

We touched down in Miami a few hours later with no plan of what to do or where to stay other than, first, try my luck at US Customs, second, see if American Airlines would still honour tickets for our original return date, and then third, find out if Corporate Stays could move our booking over to one of their Miami vacation rentals.

The automated custom machines that scan your passport and take your picture cleared my son buy flagged my print-out with a big “X” over my face. We proceeded through the queue for the first customs check. The agent asked where I was coming from, and how long I’d been in Panama. I explained what happen, he checked both our passports, stamped our customs slips, and waived us on through to the next checkpoint where they issue tourist visas.

For the first time in over 12 hours, I was excited, even if it was a small win that didn’t necessarily mean anything. My son was picking up on my vibes because and started to growing more excited about going to Miami, and I was trying to keep my cool and manage his expectations so he wouldn’t be even more disappointed should this last, desperate attempt didn’t to save our family vacation didn’t pan-out.

After all, we weren’t out of Kafka’s Labyrinth yet.

When we hit the final customs checkpoint. The agent asked why we’d been in Panama only 12 hours, and we told the story again. He looked at me inquisitively, grinned, stamped our passports, and said “Well, I’m giving you a 6 month visa, just make sure you’re out of the country before you passport expires.”

Once on American soil, we headed to the American Airlines ticket counter and sorted out everything for our original return date at no extra cost. Then we got in touch with Corporate Stays, apologized for missing our driver in Panama City, and explained the situation. They said they’d look in to what they could do and get back to us.

Since all their apartment rentals were in South Beach, we cabbed it out that way to get some lunch while we waited to hear back. My son was blow away by the scenery of the cab ride and the vibe on Ocean View where we dined overlooking the beach. Our vacation was finally coming together.

Corporate Stays got back to us that there was nothing available that night, but that they could have something for us by the next day at no extra charge, so we went looking for a hotel. Everything in the neighbourhood was booked, but we stumbled on the nicest hostel I’ve ever stayed in only a block from the beach, so we booked a room, showered, hit the beach before dinner, and then settled in for one of the deepest, most well-deserved sleeps we’ve probably had.

The next morning, we started planning out our activities for the week, and then headed to the beach to wait for Corporate Stays to get back to us. It was a much-needed relaxing day, lying in the sun and splashing in the ocean.

My son had never played in waves like that before, and throughout the day, he kept telling me how much better this was than Panama. My heart would break a little every he’d say it.

Corporate Stays came through just before dinner time. They’d found us a two bedroom apartment right in the heart of South beach, only three blocks from the beach, and surrounded by great restaurants and every other amenity you’d need for a family vacation.

The next day, I made good on my promise to my son to see monkeys. Only a $10 Uber ride from our apartment rental was Jungle Island, place where you can see monkeys, take pictures with all kinds of animals, and splash around a floating obstacle on their private beach.

The following day, we headed to Everglades Safari Park, took an airboat tour of the surrounding swamp, saw a whole bunch of gators, and even took pictures with a baby gator. On our way back, we even stopped at a roadside BBQ shack to eat some gator (and catfish, and froglegs).

The day after that, we drove out to Rapids Water Park in Palm Beach, the largest water slide park in South Florida. Then we killed our final day taking it easy at the beach before catching a 8:45pm flight back to Montreal.

In the end, as much as I wanted to expose my son to a completely new culture and language, South Beach ended up being a paradise for him. The only thing we didn’t get to do was surf, but he did get to hold different exotic animals, chase geckos in the garden, ride water slides larger than his imagination, and go to the beach anytime he wanted. It wasn’t the South American adventure we set out for, but it was an adventure, as well as, hands down, the best family vacation I’ve ever been on.

4 thoughts on “How ‘Murica Saved My Family Vacation” 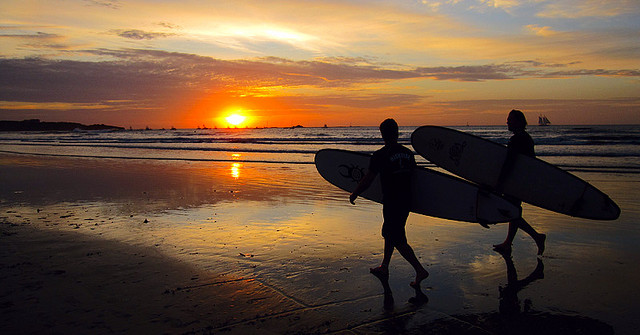