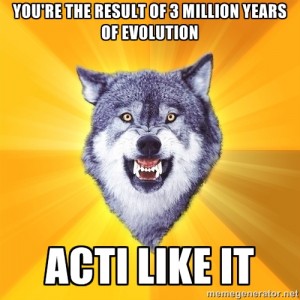 The military is full of oxymorons and cliches, too. One of them we’d hear often when holding the push-up position, humping a ruck through the boonies, or just generally kicking the shit out of ourselves was “Pain is only a sign you’re still alive.”

In other words, “If it’s hurting, you’re still breathing, and things could still get a lot worse, so you should just nut-the-fuck-up, endure the agony or (mild) discomfort, and get’er done — because you can, because you’re that resilient, and because you can (probably) handle it.”

It generally worked. I’ve seen men and women respond to this aphorism by sucking it up and pushing through, well beyond the point they thought they could.

It also taught me something about life in general: that you need to embrace the pain, and endure it while it runs its course, because you’ll come out the other end a meaner, tougher, and wiser person.

This, of course, is no new revelation. It was something Nietzsche was on to back in the 1880s. But it’s still worth reminding ourselves that it’s more than a way to (re)interpret the past and all the shitty, tragic things that might’ve happened to us.

It’s a way to move forward, to carry on into the storm, and choose adversity over comfort and security in hopes that we can lead a life that’s better than fiction, and become someone our heroes wouldn’t be ashamed of.