If a picture is worth a thousand words, then they’re really important in advertising, wouldn’t you say? But you can’t take pictures with you, can you?

But slogans… A slogan says so much with so little. It’s the brand’s memo to the record, and that’s a big deal, wouldn’t you say?

I also think we can learn a lot from a good slogan. Every brand has a logo, but not every brand has a slogan. Well, here are the Top 5 Brand Slogans (in no particular order) according to me.

Personally, I was never crazy about this one, but it seemed to define the brand for a generation (and maybe longer). But it’s so much more than just a slogan. It’s a mantra and a call-to-action.

The slogan was coined by Dan Weiden, co-founder of Wieden+Kennedy, for a 1988 ad campaign, which debuted on July first that year. Nike trademarked the slogan in 1989, and it was chosen by Advertising Age as one of the top slogans of the 20th century.

What I’ve always love about this slogan is that it’s a question. But it’s also so much more than just a question. It’s a rhetorical question. It’s cute and it’s challenging, and the creative is as simple and wholesome as a glass of milk.

The slogan was originally created for the California Milk Processing Board, and subsequently licensed out to similar organizations throughout the US. It was also credited with greatly increasing milk sales in California, but not nationwide.

Okay, so a lot of us has haveÂ  that scene from Mad Men where Don Draper comes up with the slogan. But the slogan is actually much older than that. Lucky Strike started using the slogan in 1917 to inform consumers that their tobacco was toasted rather than sun-dried.

Regardless, everything Donald Draper says during his pitch pretty much sums up why this slogan is such a great on: “Everyone else’s tobacco is poisonous. Lucky Strike’s is toasted […] Advertising is based on one thing: happiness. And you know what happiness is? Itâ€™s the smell of a new car, itâ€™s freedom from fear. Itâ€™s a billboard, on the side of the road, that screams with reassurance that whatever youâ€™re doing is OK. You are OK.”

The snack that smiles back…

What I love about this slogan is how it’s tied to a jingle. It gets in your head and burrows into mind share in a harmless and playful kind of way:

This appeals to the whole family because singing that song is fun for the whole family — and everyone else, for that matter. If you’re a parent, they are a “wholesome snack that smiles back.” And if you’re a kid, you get to “bite their heads off!” I mean, how cool is that?

The other white meat. 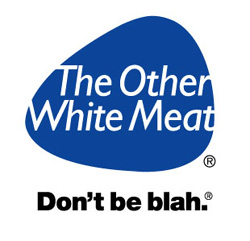 What I really love about this slogan is that, according to the US Dept. of Agriculture, pork is not a white meat. But that doesn’t matter because this slogan challenges us to use our imagination to prove it right.

And that’s what I think is so great about this slogan: it involves the consumer. And in that way, it kinda uses the foot in the door technique.

Any big ones I missed? What are your favorite slogans?